New York State’s budget process uses an executive budget model. Under this system, the Executive is responsible for developing and preparing a comprehensive, balanced budget proposal, which the Legislature modifies and enacts into law. The Governor is required by the State Constitution to seek and coordinate requests from agencies of State government, develop a “complete” plan of proposed expenditures and the revenues available to support them (a “balanced budget”), and submit a budget to the Legislature along with the appropriation bills and other legislation required to carry out budgetary recommendations. The Governor is also required by the State Finance Law to manage the budget through administrative actions during the fiscal year.

The State’s fiscal year begins April 1 and ends on March 31. However, the actual “budget cycle,” representing the time between early budget preparation and final disbursements, begins some nine months earlier and lasts approximately 27 months – until the expiration of the State Comptroller’s authority to honor vouchers against the previous fiscal year’s appropriations. 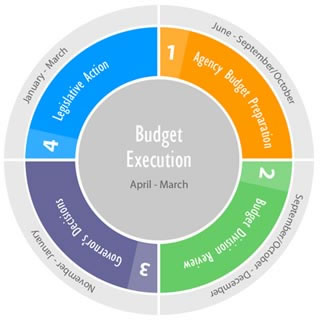